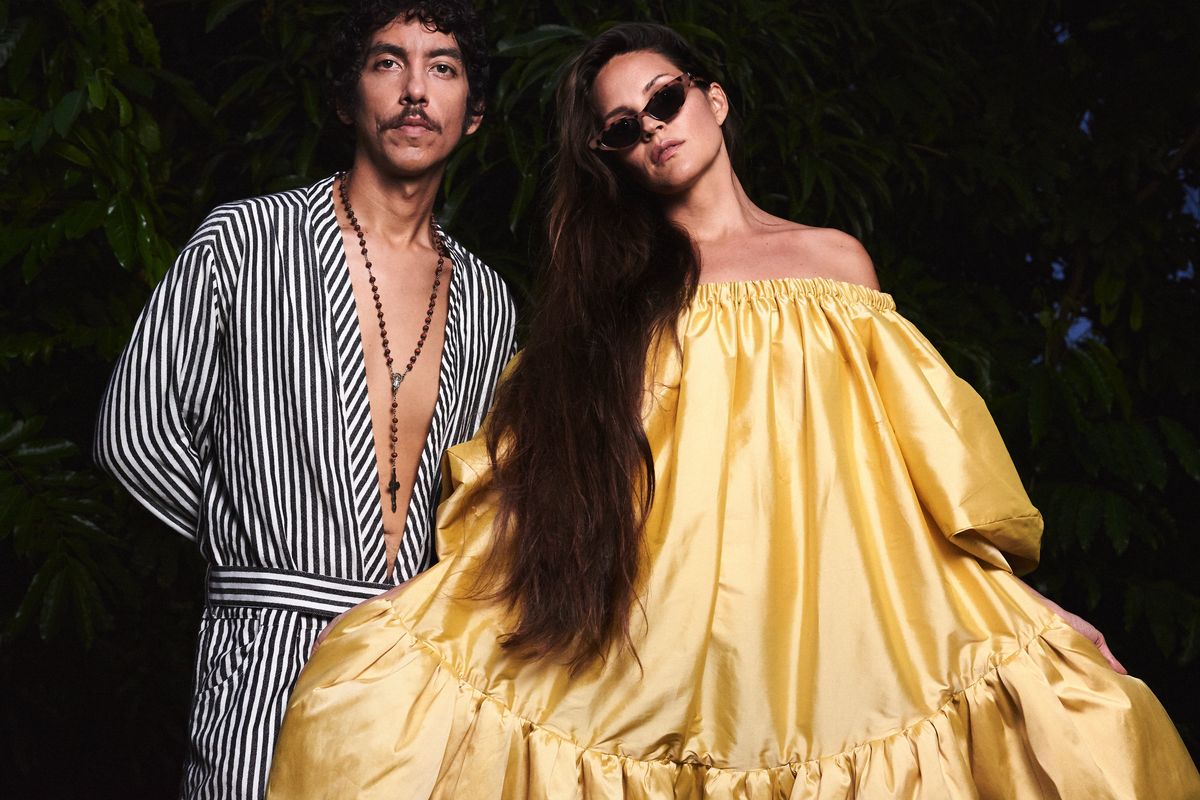 Puerto Ricans who migrate from the island are typically never far from it emotionally, culturally or mentally — the connection to their homeland is a muscle memory of the heart. But while resettling in the Caribbean US colony after a decade living in idiosyncratic New York, Buscabulla's Raquel Berrios and Luis Alfredo Del Valle found a reintroduction was needed.

The footage in "Mío," Buscabulla's latest video, out today, is a patchwork of cuts from an upcoming documentary short — slated for release by end of summer — centered around the theme of coming home, as is the song's corresponding full-length album, Regresa.

A lot can change in 10 years, and that's certainly the case for Puerto Rico, even in just the past few: consider the 2017 crisis following Hurricanes Irma and Maria, last summer's mass protests that ousted then-Governor Ricardo Rosselló, this January's devastating 6.4-magnitude earthquake centered in the south and now the stress of a pandemic on a healthcare system that's regularly characterized as debilitated.

Opening "Mío" with swaths of land for sale and a sign announcing the construction of a tourist mega-resort in Aguadilla at Playuela — which activists have been fighting against for two decades — is telling.

Berrios and Del Valle knew that, post-Hurricane Maria, disaster capitalism had glued itself to the economically devastated colony like a barnacle, threatening to further bog down an already sinking ship. Seeing these land grabs, the major influx of expats capitalizing on tax incentives intended solely for outsiders and the continued deterioration of quality of life for Puerto Ricans in person, though? That's something else.

"There's a lot of people from outside buying a lot of land," Berrios tells PAPER. "A lot of people come not really wanting to understand the culture or language, but trying to impose themselves."

Covid-19 constrictions led Berrios and Del Valle to splice together and edit footage — a combination of work by Chris Gregory-Rivera, Michael Kirby Smith and some shots by Ed Mariota and Thomas La Grega — on their own. Contrasting the swimming tourists with local traditions like the Festival de las Mascaras in el pueblo de Hatillo was intentional.

"It's not a touristy thing," Berrios says of the annual event. "It's so rowdy and loud, and that's what attracted us to the festivity, that it was very much for the people, mostly working-class people of Arecibo and Hatillo."

You might remember this festival theme from the video for "Vámono." Shown in "Mío," though, is the actual event itself, as well another mask-centric tradition, the Vejigante Festival, in Ponce.

Despite the pandemic — or maybe because of it even, as extra-cheap flights are widely available — tourists continue to land in Puerto Rico. The CDC recommends essential travel only, and after a failed campaign to reopen tourism, the Puerto Rico Tourism Company is now echoing the same plea. Activists concerned about the spread of Covid-19 have been rallying for the shutdown of the San Juan airport, even. (Because of Puerto Rico's status as a territory, the Federal Aviation Administration would be the entity to make this call—not local government.)

Still, they come. And among them, there are people who are adamantly anti-mask, who refuse to cooperate with Puerto Rico's government mandate that masks must be worn in public spaces. Businesses also enforce this rule.

As Berrios and Del Valle collaged together "Mío," reports of escalations between tourists and locals hit a high. After refusing to wear a mask in La Perla, the historic neighborhood made tourist-famous as the setting of the video for Luis Fonsi and Daddy Yankee's 2017 hit "Despacito," featuring Justin Bieber, a woman posted a photo of the physical backlash she received. In another incident, a group of tourists trashed a Zara at a San Juan mall to the sum of thousands after employees refused to allow them inside without masks.

Another guy was clubbed — literally with a golf club — by a security guard at a local grocery store after he spit in an employee's face. The altercation, unsurprisingly, was a result of the man's refusal to wear a mask.

The anti-masker of the latter incident was a US-born resident of Puerto Rico.In a local interview Berrios saw afterward, he recalled a time "when everything was chill, and people would welcome us." He added, Berrios says, "that lately all the young people are having a problem with Americans coming here. And he was just complaining about it."

Del Valle notes, "He said something very curious: That maybe [Puerto Ricans] should have done something back in history when they had a chance. To me, that's wild he would say that."

This man must not know that fierce nationalist and independence movements have been ongoing — and remain today — ever since the US invaded Puerto Rico in 1898. Indigenous peoples like the Taínos fought the Spanish occupation before it, too.

People have confused "Mío" for a love song, or an exploration of identity. The latter is closest to the truth.

"I think that we're kind of exploring, in a way, what is ours? What's our true identity?" Berrios questions. It's also about "the need for locals to reclaim" the land. "To speak out loud to say, this is mine, and I have to be respected, and whoever comes here needs to know their place."

From Your Site Articles