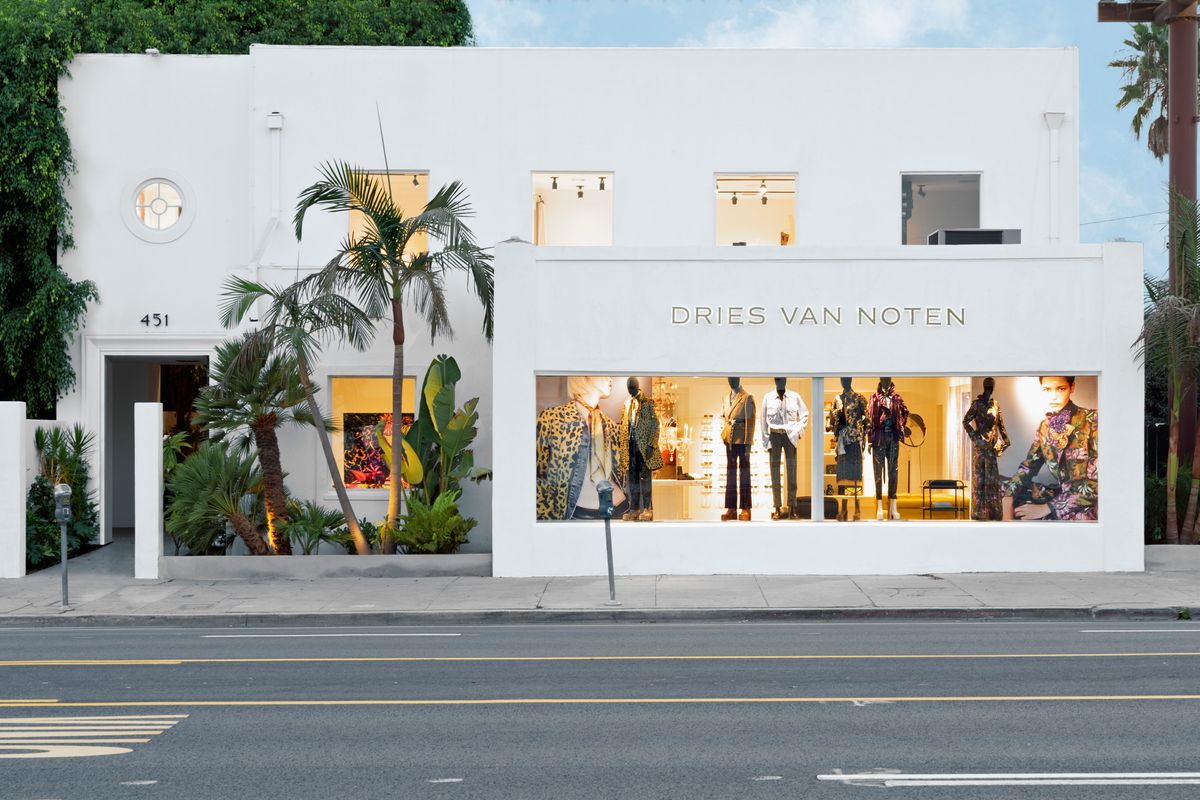 It's a big deal for Van Noten, who up until now has never had a standalone store in the US. In fact, the 8,500 square foot shop on La Cienega Bouldvard is his largest retail location yet, bigger than any of his storefronts in Antwerp (where he's based), Paris and Asia.

His LA store, which officially opened today, occupies the space formerly held by Opening Ceremony (DVN often held pop-ups there) and consists of two buildings: A two-story "Big House" housing men's and women's collections, and a "Little House" that acts an exhibition space for outside creatives and collaborators.

"It's already quite wild that I'm dreaming to open a store in the US and obviously then you start to think about New York or Los Angeles," Van Noten said in a Q&A video this week. "Los Angeles is such an incredible city. It's like a hub of creativity. It's a beautiful climate. It's a completely different atmosphere. And as I also wanted to change the concept of a store, I thought that LA was going to be really appropriate to do that."

Those who've marveled at the Dries documentary on Netflix know the designer's creative process is instinctually intimate and is all about being close with nature. (He's an avid gardener, as his lush prints and textiles demonstrate.) So the fact that he planned the entire opening remotely via FaceTime shows just how much he's had to adapt in the wake of COVID-19.

Part of that process was rethinking what shopping should be and can look like in this new retail environment. As such, he set out to incorporate an eclectic mix of clothes, art, music and food throughout the space for a more holistic approach. Equally as important was ensuring opportunities to invite young artists from a variety of disciplines to create a kind of community.

The inaugural partners include fellow Belgian iconoclast Ann Demeulemeester, whose fine tableware and porcelain will be exhibited at the ivy-covered Little House bungalow, and London-based jeweler Alan Crocetti, whose designs will be shown inside The Big House alongside installations of the artist Richard Stipl.

"Afterwards, we're going to have a mixture of artists, young artists, more established artists, applied art, galleries," he said. "It's really like a space where people can meet where you can show things without any constrictions where we can do really everything that we would love to do."

Among the other treasures one can find inside, in addition to racks of Van Noten's delightful ready-to-wear, are archive rooms featuring a selection of pieces for purchase from past collections, starting from the '90s and all the way up to his lauded Spring 2020 collection with Christian Lacroix. Eventually, customers will be allowed to come in and bring their old DVN pieces that will be restored and refreshed.

The store is the second standalone location Van Noten has opened since being acquired in 2018 by Puig, the fashion and fragrance business that also owns Nina Ricci, Carolina Herrera and Paco Rabanne. (He opened a Shanghai store this summer.) Could a New York flagship be in the works?

"We are very happy that now we opened in LA," he said. "It's going to be huge experience. We're going to learn a lot from it. And once we are really ready, I think we're going to start to look for a building in New York, but of course the space is very important, so it really has to be the right building. So the moment we find that, then here we are in New York."

This Brazilian Footwear Brand Dropped Its Most Sustainable Sandal Yet

Looking Back at Juicy Couture's Iconic Moments in Pop Culture

The First Fashion Week of 2021 Is Already Canceled

This 'Musical Coven' of Hitmakers Wrote a Perfect Halloween Album

Kim Gordon Doesn't Always Feel as Cool as She Looks