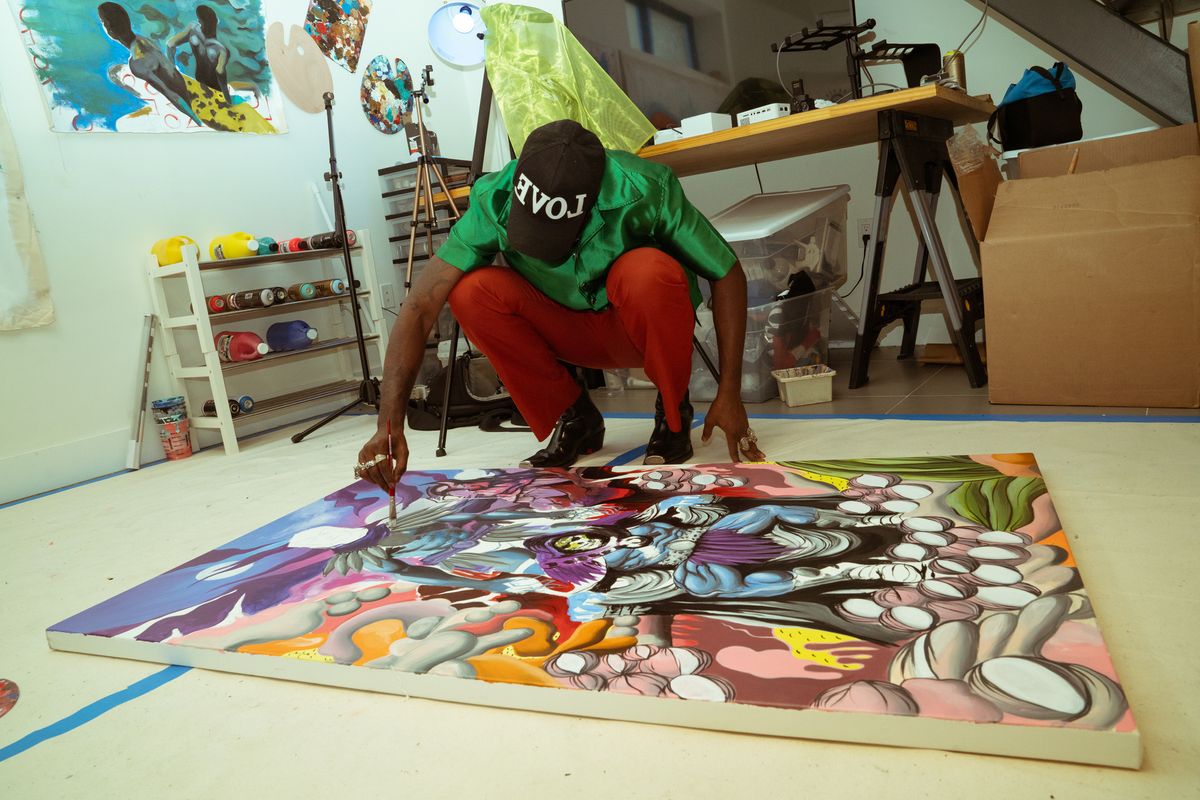 Long before this year's social uprisings and racial reckoning in the US, Gianni Lee had been using a variety of creative mediums to question the current climate in America. Having grown up as a young Black man in West Philly, being profile for a crime he didn't commit is among the many personal experiences reflected in Lee's work.

The multi-hyphenate — he dabbles between music, art and fashion — first gained popularity through his viral mixtapes before launching a cult-favorite streetwear brand called Babylon Cartel worn by everyone from Jaden and Willow Smith to Rihanna. He's since become one of the most well-known emerging artists in LA: his 2018 art show, called "They Sat Back, They Let it Happen," notably confronted slavery and the ways it exists today in different forms.

Describing his art-making process to PAPER, he admits he's "all over the place" while at the same time embracing the multitude of inspirations and sources around him.

"Lately, I've really been into podcasting, listening to discussions, watching old documentaries, and trying to get inspiration from language and dialogue," he says. "A lot of times I like to have footage around – film, video, and video games, just to get me diving into color, shading, reflected light and rim light. I look for those things even more and it helps me better translate that into my work to bring some dynamic work to life."

Brands from Levi's to Ugg have since come calling, enlisting the designer to collaborate on everything from clothes and accessories to home goods.

"I like brands with a high taste level. When I say high, I mean expansive," Lee says. "To be completely real, I don't like basic shit, so I don't want a brand I work with to be comfortable with mediocrity. More importantly, I only work with brands that are aware of and sensitive to Blackness and all its many nuances, forms and genius. I can't work with a brand that is not socially aware of the impact and beauty of Black bodies in the diaspora."

Lee's latest project sees him take on the world of sci-fi with an art print depicting Skeletor from Masters of the Universe and his progression through the years of battling He-man. The collaboration with Mattel is part of the toy company's new Mattel Creations e-commerce and content platform, which launched today as part of its 75th anniversary.

Other artist collaborators include Travis Ragsdale, Distortedd and Cristina Martinez, each of whom reimagined their own Mattel brand.

"This painting was all about facing ourselves, and being comfortable and proud of that journey and the scars we picked up along the way," Lee says. "Each Skeletor is the same, but from different eras. You have a younger, more vibrant Skeletor — he's skinnier, his armor is lighter and more expressive. His wounds newly healed, fresh on his journey. That old soul sitting below him is nothing more than his fate. The eyes and flesh looking growth surrounding the two is a recurring theme in my work. I liked the challenge of bringing my personal work into this space. Especially with a cartoon I grew up on."

The prints are available to purchase now on Mattel Creations' site.