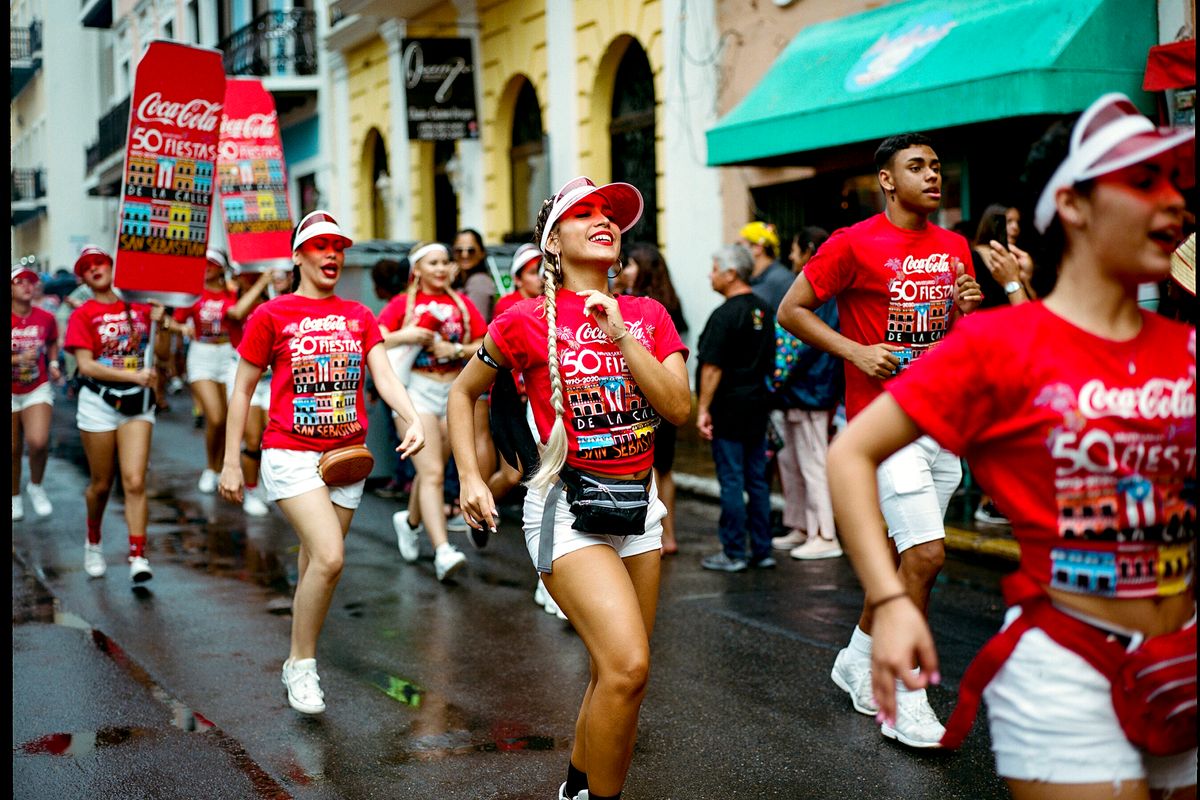 In January, editorial and social documentary photographer Ysa Perez booked a ticket to San Juan in the aftermath of the strongest earthquake to strike the island in half a century. The devastation followed Hurricane Maria, which ravaged the small Caribbean oasis nearly three years earlier in 2017.

Pérez was born in Puerto Rico but had left when she and her mother moved to Rochester, New York at three years old. In the years since, she had made one trip back when she was 15. This time, her visit had a special mission: to come face to face with the father she left behind 30 years ago.

"I knew the time had come," she recalls. "I wanted to go for years."

Pérez, who studied photography at Rochester Institute of Technology, had been encouraged by her professors to focus on studio lighting and commercial photography. Fiercely independent, Pérez had other plans. At 21 she moved to New York City and began an internship at Nylon before going back to Rochester to complete her BFA. After graduation, a permanent move to New York City saw her career ascend to new heights when Pérez landed a role photo assisting for GQ before she embarked on her own. In her own practice, Pérez shoots almost exclusively on medium format film and her work has caught the attention of publications and brands like New York Magazine, Nike, and Adidas, all of whom have commissioned portraits and fashion shoots from her. But her most recent work — a journey of self-discovery — hits a little different.

The pilgrimage to Puerto Rico, and soul-baring work that followed, prove Pérez is unafraid to reveal herself through the images she captures. "Connecting with other people is how I learn to understand myself more," she explains.

Through Instagram, Pérez shares intimate stories of her life and travels while connecting with people from across the globe. It was through DMs and likes exchanged over several months that she met Carlos Alfaro, who'd relocated to the island in 2018 to open a production company. Like her, Alfaro had struggled with family. With a son who lives in Hawaii while Alfaro resides in Puerto Rico, he understood her feelings of loss. A budding friendship grew between them and when the time came for Pérez to make the trip, he offered her a place to stay in his guest house.

After landing, it took Pérez six days to finally go meet her father. Every morning she planned to see him but held back. Admittedly nervous, Pérez needed time to process the magnitude of her journey. With gentle encouragement from Alfaro, she finally put her nerves aside ready to plunge into the unknown. Pérez recalls the minutes leading up to their first meeting in detail. "We drove to his neighborhood. The first house we checked wasn't his, but the second was. I walked to the door. I saw some feet and I said 'Hola' and this woman came. I was asking if my father was there in Spanish and before I could finish she said 'Tu eres Ysanya!' And she started crying and I started tearing up. My father was coming up to the house on his bike, and she was saying, 'Mira quien esta aqui!' And Carlos filmed the whole thing without me even knowing."

When Pérez reflects on meeting her father for the first time her tone changes. "I was overwhelmed at how emotional he was. I thought I was going to have a breakdown, but instead watching him cry so hard and hug me so hard... the amount of love he showed me in just a hug. I remember thinking, 'He loves me?' The whole story changed." As Pérez describes the moment, I am reminded of how important fathers are in the lives of their children and the strange phenomena of absent fathers in America, a massive problem that's too often swept under the rug in mainstream media.

Like many, Pérez was raised by women. In the States she lived with her mother as well as an older half-sister, Isandra, who is 13 years older than her and who joined the family in Rochester after finishing high school in Puerto Rico.

Ysa recalls how different the two sisters navigated living in American suburbia. Isandra, with her dark skin, coarse hair and thick accent, struggled in the predominantly white suburb. Ysa, with lighter skin and less of an accent, gravitated towards white culture, something that often inadvertently happens in first-generation immigrant families, as children try to fit in with the world around them. "I watched MTV while my sister watched BET. I called her recently about everything that's going on with racism and she reminded me of a party in college when she realized what it was like to be a minority for the first time. The police came [responding to a disturbance call] and all her white friends were free to go, but Isandra was questioned and interrogated by the police." Experiences like this are common for immigrants moving to the U.S. Within Latin and Hispanic communities, deep rooted colorism and racism exists — it's a point of contention among different Latin ethnic groups and Black people in America as the current Black Lives Matter movement sweeps the globe.

Given these dynamics, as well as the ages each sister was when she moved off the island, the two had different relationships to Puerto Rico. For Ysa, that meant growing up not knowing much about the family she had left behind. A fallout between her mother and aunt meant she never built close relationships with her relatives on the island. They'd been in touch on Facebook, but never established real relationships outside superficial pleasantries during holidays, birthdays and special occasions. A half-sister from her father's side resides on the island, and she has cousins throughout Puerto Rico she had never seen as an adult. But this trip changed all of that. Pérez was finally meeting her family.

On their first father-daughter day trip to Old San Juan, the two explored the city together, sometimes in silence, emotions simmering just beneath the surface. "It was not easy at first. We are still knowing each other. We are boxers that study each other on the first rounds. [We have] a lot of things on our minds and still have," her father, Jesus Ismael Pérez Sr., explains over email, his preferred method of communication. He doesn't have a cell phone and likes to stay off the grid.

Pérez Sr., who's worked at the University of Puerto Rico as a track and field coach since before Ysa was born, has seen his life upended by COVID-19. "Like every place, the virus has changed our lives forever. It's like being in jail... so many restrictions. We can go out from 5 AM to 7 PM [Monday-Saturday] and Sundays for emergencies only. I'm a very active person, I have been able to run, ride my bike, work out and keep in shape. COVID has let us know how fragile we are," he writes.

For three and a half weeks Pérez captured life on the island. Through her eyes we see the enduring spirit of Puerto Rico. Amid the rubble, a telephone booth on a small suburban block miraculously remains. Protestors proudly wave the Puerto Rican flag in the wind. A group of military trucks holds court against the backdrop of lush mountains in the distance, and on a deserted street horses casually walk together like old friends.

Before her departure, Pérez explored the countryside with Alfaro driving to the southwestern coastal town of Guanica, the area hit hardest by the violent earthquake. Packed to the brim, they loaded his car with essentials like bottled water, sanitary pads and diapers in their relief efforts to help those in need. People who'd lost everything were living in tents scattered across grassy fields as homes lay in abandon leveled to the ground.

Family who has lost their entire home and livelihood living in a tent in Guánica, Puerto Rico (January 25, 2020)

Like Pérez Sr., Alfaro, too, has seen his life and work change dramatically. Relocating brought fresh opportunities for him to explore the island's creative industries. But when the coronavirus hit, production jobs literally dried up overnight. Pre-COVID-19, Alfaro says "business was doing great." Now, "the government has mandated a very strict lockdown of the island" and he hasn't "had any work since."

After returning from Puerto Rico, Pérez spent almost one month in Mexico City opening a group exhibition with the friends behind trippin.world, 35n45s and Fabrica29, spearheaded by a creative collective of artists who live, work and play in CDMX. Pérez has worked with the team behind 35sn45s before with a previous group show in Mexico City.

Pre-COVID-19, Pérez would travel between Miami, New York City and Mexico often. Her nomadic lifestyle comes from spending much of her time alone, needing to find her place in the world. It's something she attributes to her father being absent from her life, but it also — and more importantly — fueled her ambition to pursue her dreams.

As Pérez reflects on her relationship with her father now, it's clear that while growing up without him was difficult for her, she understands so much more about herself through their blossoming relationship. "[There are] a lot of things I've wondered about all my life, if it was depression or bipolar." Reflecting on their shared personalities she notes, "it was interesting to see someone act like me — with mannerisms like me."

After not having a relationship with her dad for 30 years, today, they are in constant contact, exchanging emails regularly. Reflecting on the monumental experience, she notes her biggest takeaway: "I have a family. You know all my life I was longing for it and longing for it and now it's like 'Hey! I know them! I finally know my family."

From Your Site Articles

BTS Went All Out for 'Map of the Soul ON: E'

Mariah Carey Said Her Son Was Bullied By a 'White Supremacist'